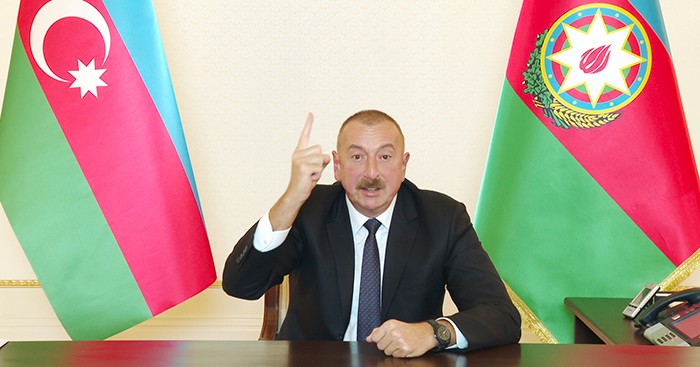 National Flag Day is a national holiday celebrated in Azerbaijan every year on November 9. It was established in 2009 by the order of President Ilham Aliyev to mark the anniversary of the Tricolor Flag adopted by the Azerbaijan Democratic Republic on November 9, 1918.

On May 28, 1918, the independent Azerbaijan Democratic Republic was established in the South Caucasus which was the first democratic method of governing in the East. Despite only 23 months of existence, the ADR has made many achievements and has democratic institutions such as parliament, elections, a free judiciary, and a free press. Representatives of the minority peoples living in Azerbaijan – Russians, Jews and Armenians – were also represented in the parliament. For the first time in the Muslim East, voting right was granted to womens in Azerbaijan in 1919.

The ADR had all the state attributes – anthem, flag and national emblem. An independent currency, army and other government agencies have also been established. Baku State University was established in 1919 and has played an important role in the enlightenment of the Azerbaijani people.

On November 9, 1918, the Council of Ministers of the Azerbaijan Democratic Republic approved the tricolor flag consisting of three horizontal stripes. The top stripe was blue, the middle – red, the bottom – green. There is a white crescent and an octagonal star in the middle of the red stripe. The author of the formula “Turkism, Islamism and modernity», which expresses the three colors of the state flag and constitutes the three basic principles of our ideology of national independence in the early twentieth century, is a prominent Azerbaijani thinker Ali bey Huseynzade.

One of the most glorious and memorable days in the history of the National Flag of Azerbaijan is December 7, 1918 – the opening day of the Parliament of the ADR, the first democratic and secular state in the Muslim East and the Turkish world. The Azerbaijani flag was hoisted over the parliament building (now the building of the Azerbaijan Institute of Manuscripts).

Azerbaijan regained its independence for the second time in the 20th century on October 18, 1991 and declared itself the successor of the ADR. All the national attributes of the ADR, including the tricolor flag, were re-adopted and hoisted in government buildings and international organizations as a symbol of an independent state.

On February 5, 1991, the Supreme Soviet of the Republic of Azerbaijan adopted the Law “On the State Flag of the Republic of Azerbaijan”and declared it the state flag. This flag was approved as the state flag of the Nakhchivan Autonomous Republic on November 17, 1990 at the session initiated and chaired by the Chairman of the Supreme Assembly of the Nakhchivan Autonomous Republic, National Leader Heydar Aliyev.

The national flag is hoisted on the buildings of government agencies and diplomatic missions of the republic, along with important international events, prestigious ceremonies and assemblies, hoisted at large-scale socio-political gatherings, cultural events and sports competitions, embodying national unity. The Law of the Republic of Azerbaijan “On the Rules of Use of the State Flag of the Republic of Azerbaijan” of June 8, 2004 improved the legislative base in this area.

Unfortunately, we would like to note that in the first years of independence, Azerbaijan faced many difficulties. The breakdown of economic relations between the former USSR republics, instability, and the reduction of financial and technical support to zero put the oil and gas industry in a serious crisis.

However, the far-sighted policy founded by the National Leader Heydar Aliyev and the sustainable development strategy pursued by his worthy successor Ilham Aliyev have created conditions for our country to overcome many problems. During the 30 years of independence, our state has taken a worthy place in the international arena and gained great prestige.

At present, Azerbaijan has returned Karabakh lands at its own expense, and intensive demining is being carried out in 10,000 km of liberated areas to accelerate the return of IDPs to their homes.

In May 2021, President of the Republic of Azerbaijan Ilham Aliyev said in the video format discussions of the Nizami Ganjavi International Center “South Caucasus: Prospects for Regional Development and Cooperation»: “After the opening of the Zangazur corridor, new opportunities will arise. Therefore, I want to say that Azerbaijan is open to cooperation and planning our common future, because whether we like it or not, we are neighbours and we have lived together, we must learn to live together again”.

The city of Shusha, liberated on November 8, 2020 as a result of the unparalleled heroism of our army, was declared the “Capital of Culture of Azerbaijan”by the order of President Ilham Aliyev. Over the past year, a number of cultural events have been successfully restored in Shusha: “Kharibulbul”International Music Festival, International Culinary Festival, “Vagif Poetry Days”and others.

The victorious Supreme Commander-in-Chief, President Ilham Aliyev, said: “We will turn Karabakh into a paradise. All instructions have already been given. All work is being done, will be carried out in a planned manner, and we will live in these lands forever.”

Every citizen of Azerbaijan respects our flag and considers it his sacred duty. The Azerbaijani soldier also swears by the tricolor flag while assuming the supreme mission to protect the sovereignty and territorial integrity of the Motherland. Our tricolor flag will always be eternal, and will proudly confirm the signature of the state and people of Azerbaijan all over the world.

Philosophical visions, the themes of ‘religion’ and ‘prophet’ in the poems of the great medieval Azerbaijani poet and thinker Sheikh Nizami Ganjavi (1141-1209)