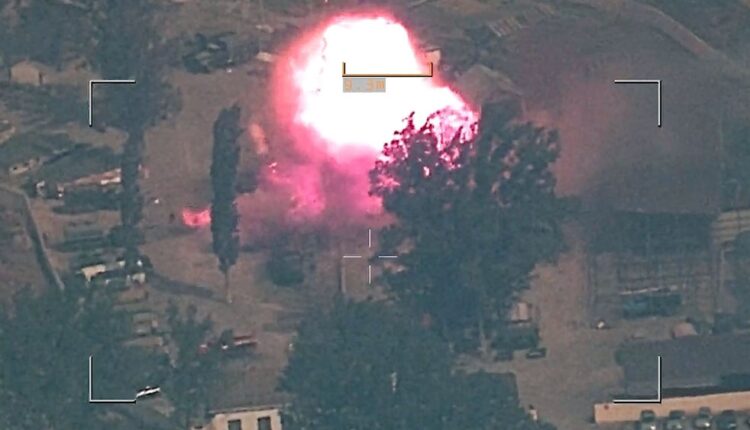 Baku (UNA-OIC) – “Members of illegal Armenian armed formations in the territory of Azerbaijan, where the Russian peacekeeping contingent is temporarily deployed, grossly violated the provisions of the Statement of November 10, 2020, and committed a terrorist and sabotage act against the Azerbaijan Army Units on August 3. Serviceman Kazimov Anar Rustam became Shehid as a result of the terrorist and sabotage act,” the Azerbaijan Ministry of Defense told AZERTAC.
“Moreover, members of illegal Armenian armed detachments attempted to seize the Girkhgiz high ground, located on a mountain range covering the territory of Kalbajar and Lachin districts, and establish new combat positions there.
As a result of the “Revenge” retaliatory operation conducted by the Azerbaijan Army units, the Girkhgiz high ground, including Saribaba and several advantageous high grounds along the Karabakh range of the Lesser Caucasus Mountains were taken under control. Currently, the Azerbaijan Army units are carrying out engineering work on the establishment of new positions and laying supply roads on advantageous frontiers.
During the operation, several combat positions of illegal Armenian armed detachments were destroyed, and an airstrike was inflicted on a military unit stationed in Yukhari Oratagh settlement of the former Aghdara district. As a result, the manpower of illegal Armenian detachments was annihilated and wounded, as well as several D-30 howitzers, military vehicles and a large amount of ammunition were destroyed.
The Republic of Azerbaijan has repeatedly stated that the presence of Armenian armed forces and illegal Armenian armed formations in the territories of Azerbaijan, where peacekeepers of the Russian Federation are temporarily stationed, remains a source of danger contrary to the Joint Statement. The demilitarization of those territories, the complete withdrawal of Armenian troops, and the disarmament of illegal Armenian armed detachments are absolutely necessary.
The Ministry of Defense hereby declares that following the Constitution of the Republic of Azerbaijan, any terror and provocation committed in the sovereign territories of the country will be resolutely prevented and countermeasures will be even more crushing,” the ministry said.