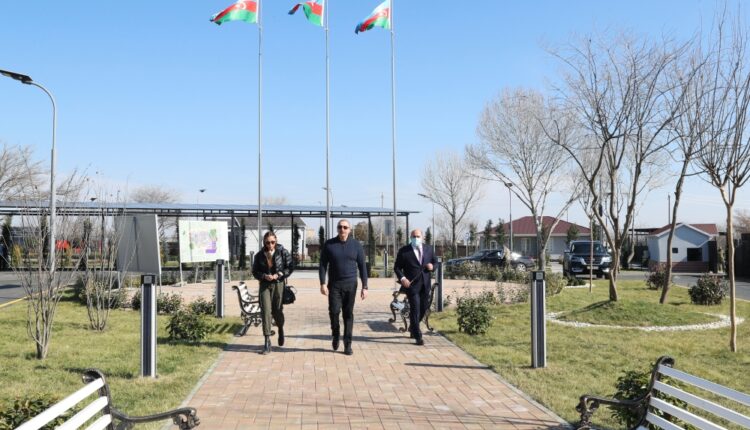 Jeddah (UNA-OIC) – After the liberation of Nagorno-Karabakh from the Armenian occupation, Azerbaijan began a massive reconstruction process in the region.

This rebuilding process falls within a plan to develop the districts of the region, ensure the safe and dignified return of refugees and internally displaced persons (IDPs), provide social and economic projects for all residents, including Armenians, and revive the cultural and historical centers in the region.

In statements during the visit of the Union of OIC News Agencies (UNA) delegation to the liberated areas, Assistant to the Azerbaijani President, Head of Foreign Policy Affairs Department of the Presidential Administration Mr. Hikmet Hajiyev said the government responded to the destruction caused by the Armenian occupation with a message of reconstruction and development.

He revealed that the government has constructed an airport and roads in the Karabakh region, and is currently building infrastructure to secure a dignified return for IDPs and refugees.

Hajiyev affirmed that Azerbaijan’s government is working to transform Nagorno-Karabakh into a paradise and a land of peace and coexistence for all, including Armenians, who can live in peace while respecting their Christian heritage and traditions. He also stressed that Azerbaijan as a Muslim country respects all divine religions and will seek to implement this principle in Nagorno-Karabakh.

The Azerbaijani official emphasized that his country’s current strategy towards the liberated areas is more economic and social than military, noting that the government is working to integrate these areas into Azerbaijan through social-economic packages, including for the Armenian population living in those areas.

In this regard, Hajiyev disclosed the launching of development projects in Aghdam and Shusha, calling on the Armenians to contribute to the reconstruction and development process while respecting the laws of Azerbaijan and to be Azerbaijani citizens. He reiterated that the government will work in that case to provide them with security, protection, and socio-economic development, as part of Azerbaijan’s vision to reconstruct the Karabakh region.

On March 9, 2022, the government announced, among its priorities, the development of Nagorno-Karabakh tourism potential and the construction of the necessary tourist infrastructure, expecting that about one million tourists will visit the region by 2025. The government also started a project to build 30 small hydroelectric power plants in the liberated areas, with a special focus on renewable energy sources.

The Assistant to the Azerbaijani President revealed that the government is working to “establish the concept of the smart village” in the reconstruction process in the liberated areas, with all that that implies in terms of technological, economic, and social innovations. He pointed out that given the fact that operations start from zero, it is easy for the government to implement the latest development models, and to establish its projects according to these models.

Since the liberation of the territories more than a year ago, the government has been keen to restore the cultural and historical character of some of the liberated areas, including the city of Shusha, which Hajiyev describes as “somehow linked to the DNA of the Azerbaijani people”, in allusion to its historical and cultural importance for Azerbaijan.

The foundation of Shusha was laid by Azerbaijani Karabakh khanate’s Panah Ali Khan in 1752. It is expected that the Azerbaijani people will celebrate, this year, the 270th anniversary of Shusha, which played a major role in the cultural, historical, and scientific life of Azerbaijan, in particular, and the South Caucasus in general.

Last January, Azerbaijani President Ilham Aliyev signed a decree declaring 2022 a “Year of Shusha” in the Republic of Azerbaijan.

The activities of the Khari Bulbul Music Festival were also resumed in Shusha Racecourse, and Vagif Poetry Days were organized in front of the mausoleum of the poet Molla Panah Vagif, which shows the city’s gradual return to its cultural life.

In addition to its cultural contributions, Shusha also plays the role of a diplomatic center, as it hosted on March 2, 2022, an event to celebrate the 30th anniversary of Azerbaijan’s membership in the United Nations.

Assistant to the Azerbaijani President Hikmat Hajiyev stressed that the government is working to turn Shusha into a tourist destination, by restoring the city’s historical character.

These reconstruction efforts are faced with major challenges, most notably, according to Hajiyev, is the vastness of the liberated territories, which cover an area of about 10,000 square kilometers. He also mentioned the problem of landmines, as there are about one million mines in the liberated areas, especially along the former Line of Contact, pointing out that the government launched an operation to remove mines, along with reconstruction projects.

The Azerbaijani official acknowledged that the reconstruction process will not be easy as it requires a lot of financial resources and time. Meanwhile, he underscored that the government’s ultimate decision is, of course, to ensure the safe and dignified return of the refugees and IDPs, as well as to achieve the desired development.